Theatre Nova Scotia offers a scholarship to support professional development for theatre artists working in any form of theatre and at any stage of their careers. This scholarship was created when Jim Morrow, Artistic Director of Mermaid Theatre of Nova Scotia, named Theatre Nova Scotia as his protégé after receiving the prestigious Portia White Award. The award amount was then matched by the Theatre Nova Scotia Board of Directors and the fund was created. The purpose of this scholarship is to support theatre artists in their pursuit of professional development in specialized training programs outside of university bachelor’s or master’s degree programs or conservatory training. Programs of study can include workshops, intensives or mentorships with an established artist. The Professional Development Scholarship is presented each year during the Robert Merritt Awards.

Open to TNS Individual members. Applications are assessed by a jury arranged by Theatre Nova Scotia and the decision will be announced at the Merritt Awards that year. The award value is $1000.

The Wes Daniels Design Award honours the artistic spirit of the late props builder and set designer Wes Daniels, a long-time employee of Neptune Theatre and a gifted artist. The annual award will provide a matching financial gift of up to $1,000 annually to a theatre company to subsidize, for a given production, the hiring of an emerging theatre professional who has demonstrated a strong artistic sensibility in the field of theatre design. By providing this unique, hands-on professional development opportunity, Neptune Theatre and Theatre Nova Scotia hope to honour Wes, his work and his commitment to mentorship. The award will be administered by Theatre Nova Scotia, working in collaboration with Neptune Theatre.  The award recipient will be announced at Theatre Nova Scotia’s annual Merritt Awards.  Open to TNS Professional Theatre company members.

Theatre Nova Scotia created the TNS Legacy Award for outstanding contribution to professional theatre in Nova Scotia. The winner is announced at the annual Robert Merritt Awards. Nominations are accepted from individual members, Professional Theatre organizations, and the general public. Nominators should address how a nominee has contributed to Nova Scotian theatre in the areas of organizational development, community building, mentorship and education. Please list any volunteer or board positions held by the nominee, as well any artistic contributions made to the Nova Scotian theatre community or any other relevant information. Nominees may include but are not limited to: actors, directors, producers, playwrights, designers, scenic artists, carpenters, sound and lighting technicians, stage managers, administrators and theatre educators. Recipients are eligible to receive the award one time only.  The award is open to all Nova Scotians. See the Legacy Award Winners here.

Theatre Nova Scotia created the TNS Volunteer Award for outstanding contribution to professional or community theatre in Nova Scotia. The winner is announced at the annual Robert Merritt Awards. Nominations are accepted from individual members, Professional or Community Theatre organizations, and the general public. Nominators should address how a nominee made a significant contribution to community or professional theatre in Nova Scotia. The nominee will have shown an exceptional commitment to theatre in any area, including, but not limited to, production, backstage, administrative work, fundraising, board or committee work. Nominees must have been a member of an organization for at least one year. 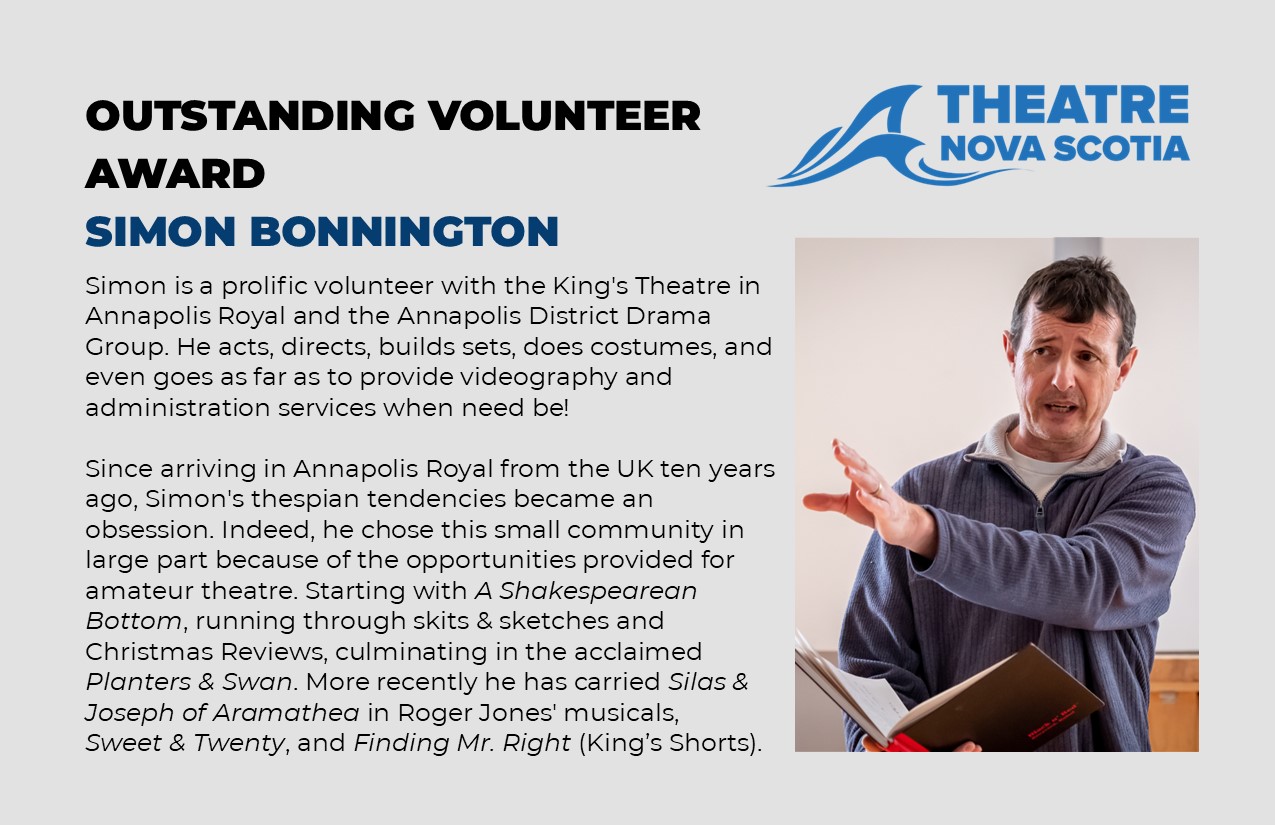 The Nova Scotia Talent Trust provides financial assistance to Nova Scotians who demonstrate exceptional potential and commitment to establish themselves as artists in their chosen fields but have not yet done so. Assistance is provided to those who are undertaking programs of study to advance their artistic development and who are pursuing career paths that can lead them to becoming established artists. Each year’s NSTT successful scholarship recipients will be considered for fifteen Special Awards. Special Awards are issued at the discretion of the Scholarship Selection Committee and are provided in addition to scholarship amounts. No other application requirements are necessary. The Theatre Nova Scotia Award, named for the award’s sponsor, will be awarded, if merited, to a recipient who shows exceptional commitment and potential in theatre. The award value is $1000.

Application Deadlines:  March 1st and May 1st every year

Theatre Nova Scotia Stage Manager and Technician Merritt Awards recognize outstanding work on professional productions in Nova Scotia in the areas of stage management and technical production. The winner(s) will be announced at the annual Robert Merritt Awards. Nominations are accepted from individual members and Professional Theatre organizations. Nominators should address how a nominee contributed to the success of a production.

FAST FACTS about the Outstanding SM and Technician Awards:

The RBC Chrysalis Emerging Artists Award is presented to an emerging artist, nominated by their peers, and exists to recognize an individual who is already exhibiting the exuberance to affect our community. This award has been created by Neptune Theatre as part of their larger Chrysalis Project concept that sees emerging artists in a multitude of disciplines working alongside Neptune's creative staff for a season of theatre. The award will be administrated by Theatre Nova Scotia. 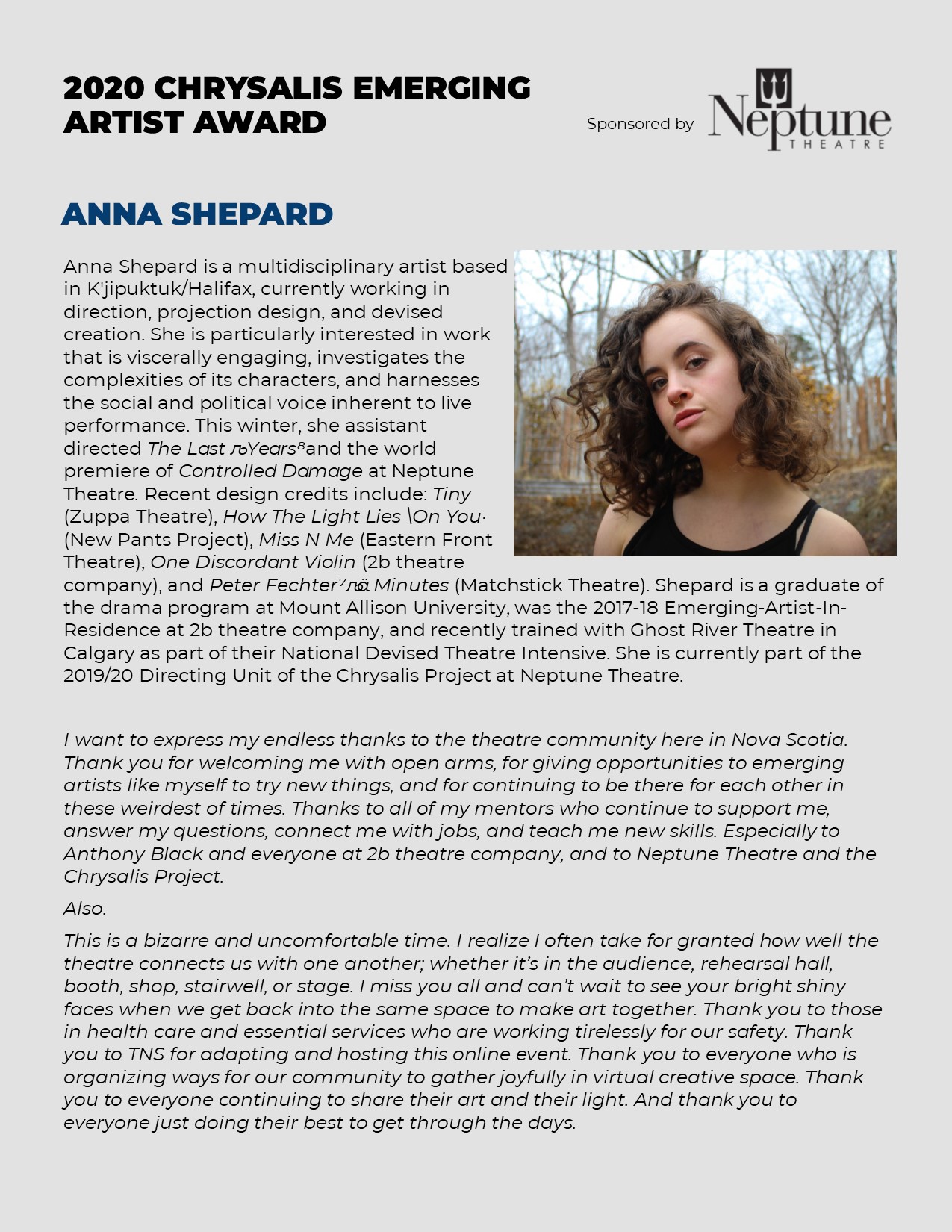 The recipient will be announced at that year's Theatre Nova Scotia’s Robert Merritt Awards.

Stay in the loop?